Digital Monitoring in the Independent School: An Unlikely but Crucial Component in Maintaining Academic Excellence

Implementing an effective digital monitoring system within your school can transform academic performance and student outcomes.

Digital monitoring is a key driver in improving focus and learning, both in class and in prep, and study times. The root of improvement created by digital monitoring is a result of identifying risk concerns in students and tackling issues quickly. This can reduce challenging behaviour in class and reduce students in crisis that could lead to either leaving the school with poor mental health or being excluded for breaking school rules.

All children will face challenges and issues along the path to adulthood, but the way in which these adverse experiences are identified and tackled can change the long-term outcome. The government “Mental Health and Behaviour in Schools’ published in November 2018 outlines the need for schools to prevent, identify, provide early support, and when needed, access specialists. Schools showing best practice will adopt new methods to identify concerns so that early support can be reached.

A change to the whole school culture can be achieved by approaching risk concerns at an early stage. For instance, research into bullying found: “a causal contribution of exposure to bullying at 11 years to concurrent anxiety, depression, hyperactivity and impulsivity, inattention, and conduct problems.”

The research also found that: “as time elapsed from exposure, the direct contributions of exposure to bullying in childhood to mental health dissipated.”

This shows that schools have real potential to reduce poor mental health outcomes in students by ending exposure and tackling bullying as soon as possible.

The research overview published together with the new Ofsted inspection guidance 2019 cited: “While obviously a major issue in itself, there is also evidence that bullying can have a negative impact on pupil attainment, and that reducing bullying can be associated with improved attainment.”

But issues such as bullying can be hard for schools to spot. Independent schools also have the added challenge that parents are often working long hours, or where boarding schools are concerned, may even be in loco parentis. Parents rely on schools to be able to detect any issues and will expect to be aware of them at an early stage. With expensive school fees, the expectations of school processes to ensure well-being and help students reach their full academic potential is paramount.

Digital monitoring can aid schools in achieving the need to identify problems as they are emerging. Often students will suffer in silence and find it hard to express that they are having issues. Smoothwall research found that 98% of teachers rely on students to tell them they are being bullied but only 5% of students felt that they would be able to tell a teacher. Instead, they may show signs of being withdrawn or show disruptive behaviour in class. These signals can easily be misinterpreted for normal teenage mood swings and development. It may take considerable time before a school realises that there is something more serious developing. By then, root issues may have been missed with secondary issues starting to appear, such as self-harm or substance abuse.

Digital monitoring can identify concerns at an early stage allowing schools to act quickly before they have chance to escalate. For instance, a pupil that is being bullied may receive a hate message online. An effective digital monitoring system will identify this as a concern and discretely alert a DSL that an incident has taken place. Other examples in which digital monitoring might identify a student at risk include:

Adverse experiences can have an impact on academic and well-being outcomes, which may affect the overall success and reputation of a school. Schools can use digital monitoring to aid them in their identification of risk concerns, helping to reduce disruption and improve behaviour and pupil engagement; a crucial factor for maintaining and increasing academic excellence.

To explore how you can maximise pupil achievement using digital monitoring, read our recent whitepaper,  Achieving online safety excellence in the independent school environment. A best practice guide for school leaders and DSLs. 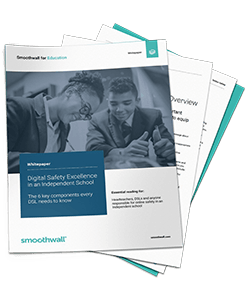 Digital Safety Excellence in an Independent School: The 6 key components every DSL needs to know.
Our free practical whitepaper is designed to guide you through a robust online safety infrastructure that will help keep your students protected, your school compliant and your reputation intact.

There are endless ways for cyberbullying to occur in schools but how can you be sure your students are protected? Do you know what signs to…

How to spot the silent sufferers before it impacts on academic attainment. A guide for Independent School leaders.

How to improve the resilience of Independent school pupils with an open approach to online safety. Learn more.