Research from Ditch the Label, one of the largest anti-bullying charities in the world, would suggest it is.

Ditch the Label recently surveyed over 10,000 12-20 year olds in the UK as part of their annual bullying survey to understand the trends and behaviours in young people around bullying and cyberbullying. The research gives some shocking insight into the use of the internet to facilitate bullying and the long term effect this can have on young people.

The research highlights the rising use of the internet as a tool to intimidate and abuse others, with social media being the most popular platform to do this.

Young people use social media for instant gratification and so it is easy to acknowledge that when this attention turns negative, it could cause psychological effects. 75% of youngsters surveyed admitted to using social media at least several times a day, with a high percentage admitting to seeking popularity through followers which in turn gives them more confidence. Dramatically, the constant need for gratification and ‘likes’ would leave 40% of participants feeling upset if they posted a selfie which wasn’t liked by others.

Social media, particularly image sharing sites like Instagram and Snapchat, has opened up a world where people can curate their ideal image of life, sharing images and stories that make their lives look more exciting than they actually are in real life. 20% of those surveyed admitted they do this, but in turn this can create a complex for those who feel inadequate or unable to compete with what is an unrealistic vision of life.

Cyberbullying can have drastic effects on young people, not just causing anxiety, but also resulting in personal physical harm. Of the participants surveyed, they confessed that cyberbullying had the following impact on them:

This is a scary landscape for our youngsters and can create long term mental health problems that can affect them long into adult life. Liam Hackett, Chief Executive of Ditch the Label told the BBC: “Cyber-bullying continues to be one of the biggest challenges facing young people. Not only is the internet redefining the climate of bullying, but also it is having clear impacts upon the identity, behaviours and personality of its young users.”

What can we do to help?

As a parent, it’s important you understand the age restrictions on social media, and only give access to your children once they are legally allowed. Talk to your children about the dangers of social media and cyberbullying, and make sure you create an environment where they feel communication is open enough to confess if they are being bullied or bullying another.

As a young person, know that many people like to use an alter-ego online, yourself possibly included, but this doesn’t translate into real life. Cyberbullies hide behind the use of the internet, and if you put a stop to it, through reporting them online and telling an adult, it’s likely the abuse will stop.

As a teacher, be aware of the long term effects cyberbullying can have on a young person. If they start becoming withdrawn and spending less time on their phone and with others, this could be a warning sign of a victim of cyberbullying. Ensure your school establishes a zero-tolerance policy to cyberbullying and has processes in place to protect young people from harm.

As a school leader, DSL or anyone responsible for safeguarding in a school or college, make sure you are using the appropriate tools to allow you to monitor the usage of social media and report on potentially harmful conversations. Smoothwall provide the UK’s leading web filtering and monitoring services to schools in order to protect young people from online abuse.

If you are a young person being bullied, call Childline on 0800 1111 for advice. For adults or organisations looking for advice or tools to protect young people in the digital world, please contact us for more information. 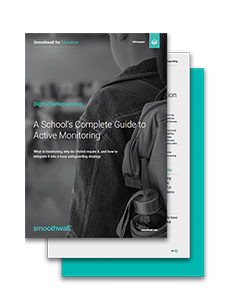 Apps are one of the most common and hard to block digital distractions facing students. Discover how Smoothwall Filter can restrict access.

Get the best quote today

Get a quote Close
Site URL: https://www.smoothwall.com/public-sector | Locale is :